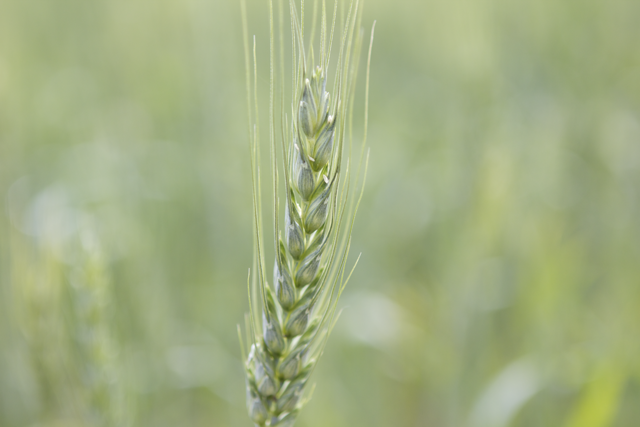 I consider this topic to be even more monstrous and unwieldy than naturally leavened bread. And if you knew how many times a day I am asked to troubleshoot bread or dough of some sort, you’d know exactly what I mean by that! But let’s just dive in anyway.

Where to begin? In theory, it’s such a simple concept, what I’m doing: buy wheat, mill wheat into flour, sell flour. Pretty straightforward, right? Sure, until you ask the most basic and fundamental question: What’s the deal with wheat? When your process is at its core very simple and straightforward, then absolutely everything hinges on the answer to that one question. And I can assure you there’s nothing simple or straightforward about the answer. Brace yourself. This is a long one.

So, what is the deal with wheat? What’s the deal with wheat in California? You may be surprised to know that we actually do grow it, and quite a lot of it. I started my wheat quest in the office of Janice Cooper, Executive Director of the California Wheat Commission. We produce over a million tons of wheat annually in the Golden State, but despite this we operate at what is called a wheat deficit, which means we don’t grow enough within our state to meet our own internal demand. This is compounded by the fact that we export a significant amount. A wheat deficit means that we have to import from other states to make up the difference. By the way, did you know that you are supporting California wheat when you buy Barilla pasta? Italy gobbles up a lot of our California grown durum.  The vast majority (let’s be real: 99.99%) of the wheat planted in CA is modern wheat.

Please stay with me now, because this is very, very important. If this blog post does nothing other than clarify the following, I will be greatly relieved:

There is no GMO wheat in the U.S. Yes, you read that right, and no, I am not confused. I don’t know exactly who has been writing and preaching that all modern wheat is GMO wheat, but whoever it is has been doing a great disservice to the public. Customers are shocked and become downright argumentative when I contradict that fact. The truth is, GMO wheat has been developed and tested, but never approved for U.S. farming. The export market has been saving us, wanting nothing to do with GMO product, at least where wheat is concerned.

GMO wheat and Modern wheat are NOT one and the same, not even close.  At its core, plant breeding, which creates modern plant varieties, is as old as farming. Anyone who has saved the seeds from their most beautiful and delicious backyard tomatoes for planting the following year is a plant breeder. We hold back and analyze the best of what we grew and try to grow more of it the next time around, and then repeat the process. That’s a simplified summary for sure, but still worlds away from injecting a plant variety with fish genes.

There is a fascination now with heritage, or “landrace,” wheat, and rightfully so. There are some real beauties being planted again that we definitely don’t want to vanish from our agricultural landscape. I mill them and I love baking with them. However, I worry that much of that interest is being fueled by a fear of modern wheat and plant breeding that just isn’t based in reality. What I learned very early on in establishing my mill, especially thanks to many conversations with Dr. Steve Jones at WSU (more about him later), is that not everything about landrace wheat is good and not everything about modern wheat is bad.

The cold hard truth about modern wheat and milling is that it was developed and exists today in complete servitude to cheap, white, mass-produced bread and flour. When we as a society decided that whiter, cheaper, bigger, and faster were the drivers for demand, then farming and breeding were happy to oblige. We demanded much higher yields per acre, shorter wheat stalks so that combine harvesting would be easier, bigger heads with fatter kernels, tougher bran so that it could be tempered and removed more easily (goodbye stone mills, hello roller mills), higher protein for loftier bread, etc., etc., etc., and we got it.

On the flip side we have landrace wheat. These wheat varieties have advantages, that’s for sure. They are more drought tolerant, they have much taller stalks which shade out weeds, negating the need for chemical weed control, and they have deeper root systems. There is more diversity of color and flavor (they actually have flavor!), and their bran is not as tough, even on the hard reds, which means they are more naturally suited to my artisan stone mill.  But the negatives are pretty compelling too. Most importantly, their dramatically lower yields, which directly correlates to less profit for the farmer and higher market prices. Their taller stalks are also prone to lodging, or bending down to the ground, complicating harvest and further reducing yields. There is a reason why many older wheat varieties died out, and the race to create modern wheat isn’t the only explanation. Many of them may not have been all that great or sustainable to begin with.

Neither option gives us best-case scenario. What we have right now is a choice between two extremes: 1) desirable older wheat varieties that may never be cost effective or profitable enough for farmers to grow on a scale that matters, but taste great, are better for the land, and have a great story, or 2) modern wheat that has better yields, better bread baking qualities but no flavor or soul, requiring chemical inputs and more of our precious resources like water. Surely we can do better. I have hope that we can and we will.

I am more convinced every day that those of us who consider ourselves to be fully invested in the pursuit of local and sustainable grains will have to accept that we need to find our way to the middle. What it will take is a strong showing of consumer awareness and support. Local mills like mine trying to connect with farmers who are open to exploring what our better wheat varieties might be. Breeders and agronomists who are willing to shift perspective away (just every now and then, please!) from corporate roller mill mentality in order to help create varieties that have better yields but require fewer chemical inputs, and are developed just as much for flavor and baking qualities. And I don’t mean white grocery store bread baking qualities. I mean artisan bread baking qualities. And it will require patience, my least favorite word and not generally an attribute that people associate with me! It’s a long, slow year in between each experimental wheat planting. Big, long lasting change happens very slowly in agriculture.

I should be up front about my own personal hopes and goals. I am not interested in pushing forth a movement where a few super cool farmers plant heritage grains and sell them in their local CSA baskets or at their weekly farmers market stalls. That’s nice and all, but that is not a movement to me. I consider a movement to have much greater reach and would mean consumers everywhere could have access to superior flour, responsibly grown and milled locally, and have access to it more than once a week or once a month. I want to change how we think about wheat and flour and how we bake with it. We absolutely can grow better wheat and mill it without destroying all of its nutritional value, flavor and texture.

That’s the deal with wheat. Okay, so not really. We have barely scratched the surface and there will be much more discussion on this topic. In the meantime, I source as much California grown grain as I can and continue pushing forward, trying to make those key connections with like-minded farmers, breeders, millers and bakers. We are all at the base of a mountain-sized learning curve and only time will tell how quickly and how well we are able scale it. It’s a tall order, but I am up for the challenge. Wish me luck.

Onward and upward. Time for a recipe.

The topic of wheat and modern vs. heritage can be divisive. In the interest of peace, I offer a recipe with a focus on something that most of us can agree on: chocolate! I wanted a simple cake, easy to prepare. I also wanted to highlight the beautiful texture and nuttiness of  hard red wheat, but almost any whole grain flour is interchangeable here. Spelt would be amazing, as would Sonora or a hard white. I used our Triple IV. In addition to rich flavor, the bran particles added a slight bit of crunch, almost like cornmeal, when the cake was straight out of the oven. That softened up and went away on day 2. I rather wish it had stayed. 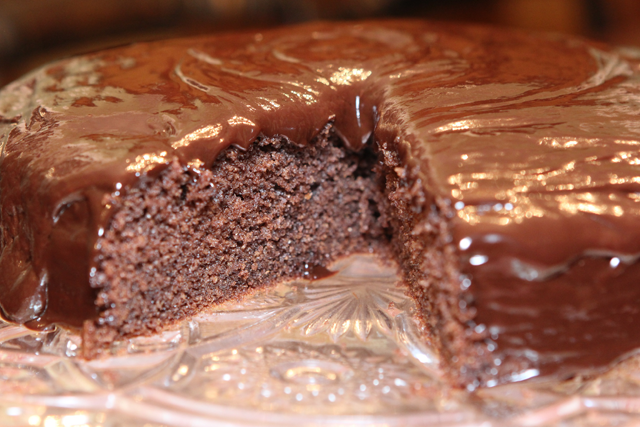 Preheat oven to 350 degrees F. Coat a 9-inch round cake pan with 2-inch sides or a 9-inch square baking pan with either butter or nonstick cooking spray. Line the bottom with parchment and spray or coat again. Dust cake pan with flour and set aside.

In a medium bowl, whisk together flour, baking powder, salt, and cocoa. Set aside.

In the bowl of a stand mixer fitted with the paddle attachment, cream butter and sugar. It will take several minutes for the butter to blend with the brown sugar and start to appear creamy and lighter in color. Add the eggs one at a time, beating well to incorporate after each. 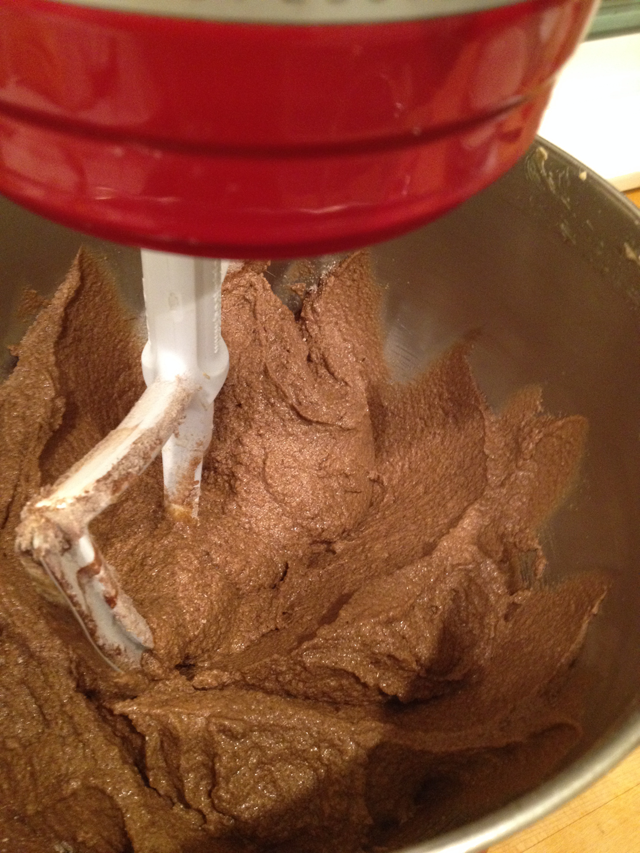 Pour batter into prepared cake pan. Bake until a tester inserted in the middle of the cake comes out mostly clean, but showing some moist crumbs, approximately 25-35 minutes. Remove from oven and allow to cool in the pan for a couple of minutes before turning out onto a cooling rack. Remove parchment liner and cool to room temperature.

While cake is baking, make the ganache. Place chopped chocolate in a small, heat proof bowl. Pour the heavy cream into a small saucepan and bring just to a boil. Pour heated cream over chocolate and allow to sit for a couple of minutes. Gently stir to combine cream and chocolate, then whisk in softened butter. Set aside until the ganache reaches a spreadable consistency. Frost cake with ganache and enjoy! 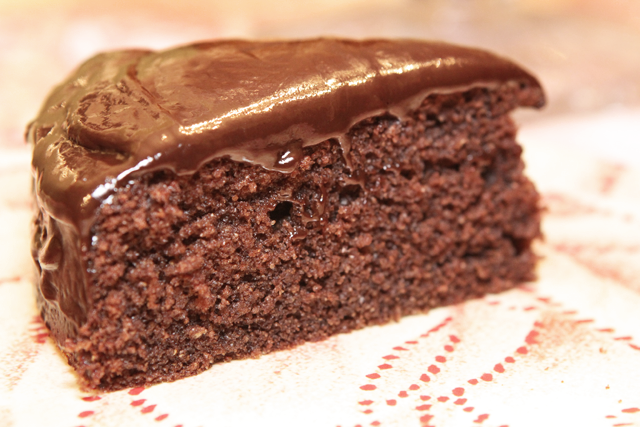