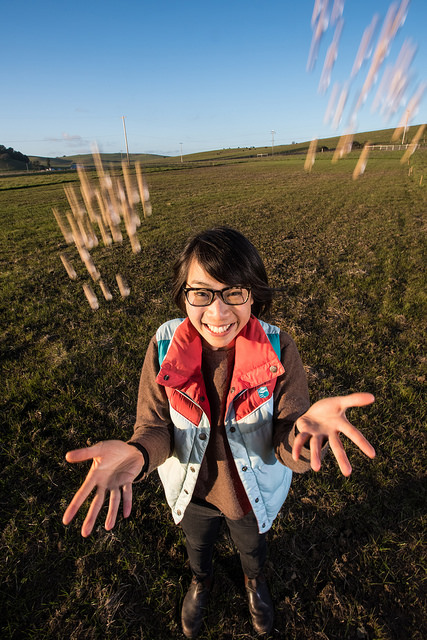 and two landrace wheats grown by her:

There are many things about Mai that make her special to me, most notably: she’s a young, female farmer growing heritage wheat – it’s a trifecta of specialness! But, there’s much more to her than that. In truth, what bonds us in this topsy turvy world of reinventing regional grain systems is her ability to see the bigger picture and her willingness to make farming choices that are centered on ethics and sustainability rather than industrial norms.

Mai is a regenerative farmer. Every choice she makes revolves around a very strict set of principles she has set for herself:

We need more young farmers like Mai! She is meticulous in her seed selection and farming practices and it shows in every kernel of grain harvested. Many more talented writers than I have done profile pieces on Mai. Some of her favorites are posted on her website, which you can scroll through and read at the bottom of this link: http://farmermai.com/farmer/. I hope this post peaks your interest enough to click on the links and get to know here a little better.

If you are interested in buying wheat berries, please go to Mai’s website and purchase directly from her. I am all about the beautiful flour, but I understand I haven’t converted absolutely everyone just yet. And if the flour isn’t your priority, then I’m in favor of the farmer making the full profit margin off of her crop.

As a miller constantly in pursuit of wheat and grain varieties that can turn a baker’s head and awaken our palates, I can tell you that farmers who truly understand where we can go and how we’re going to get there are few and far between. Mai is one of them. The driving force behind the California Grain Campaign, she and a small board of activists have begun the push to help broaden distribution and use of California grown wheat throughout our state’s vast farmers market system. You can read all about that effort here: http://californiagrains.com

The first two wheat varieties I have purchased from Mai are Wit Wolkerng and Chiddam Blanc de Mars. They are both soft white wheats that were selected by Monica Spiller of Whole Grains Connection as part of a 2004-2005 field study in partnership with UC Davis to test multiple heirloom wheat varieties for appropriateness in California agriculture, specifically looking at drought tolerance and potential yields. Though both are technically soft white wheat varieties, Mai’s 2017 harvest has given us grain that yields very fine flour with stronger than expected baking characteristics. While their soft and elegant flavor profiles definitely lend themselves to pastry, we have been turning out stellar 100%

sourdough loaves with both. If you’d like to purchase these flours and support my collaboration with Mai, they are available on our web store while supplies last: https://www.gristandtoll.com/shop/

About Wit Wolkering  and a recipe

Wit Wolkering is actually related to our beloved Sonora, but it was originally planted and grown in South Africa. Wit has a warm, mellow, buttery flavor. I encourage you to bake just about anything with it, because its creamy color and flavor are pretty magical and have the power to convince whole grain haters not to hate.

I was so in love with the sourdough bread that I made with Wit Wolkering, and so impressed with the crumb, that I made it another 3 times in a row just to prove it wasn’t a fluke. I thought that meant making a sandwich loaf with commercial yeast would be a no brainer, but the flour showed some fermentation intolerance during the second rise, cracking and breaking on the surface. Phone calls to baker friends for help and many trials later, we developed an easy method using a preferment that solves the issues and yields a perfect, delicious loaf.

Poolish: All from above

About Chiddam Blanc de Mars and a recipe

Chiddam Blanc de Mars was first grown in England, but really gained in reputation when France began growing it at the end of the 19th century. Those highly particular French bakers loved this wheat for their prized baguettes. We found its flavor to be bright and reflective of its nature: grassy, with notes of fresh herbs and sweet hay. We haven’t developed a baguette recipe yet, but it’s in the works. In the meantime, I love this flour for everything from scones to sourdough bread, and particularly for these sticky buns.

Zest of 1 Orange (optional but DELICIOUS!)

1. Mix warm milk with honey and sugar. Add yeast, stir to mix. Let stand for 5-10 minutes until yeast has bloomed.

2. Melt butter and set aside to cool.

3. In the bowl of a stand mixer fitted with the dough hook, combine flour, salt, yeast mixture, butter and egg. Mix on low to incorporate all ingredients, then raise speed to medium high and mix for 4-5 minutes. The dough will remain very loose and sticky, not cleaning the sides of the bowl. Stop and scrape down a couple of times to encourage the dough to come together, but resist the temptation to add a lot of extra flour. You can add 3-4 tbsp if it just seems too wet, but again this will not look like a traditional dough. Place dough in a bowl coated with nonstick spray, cover tightly with plastic wrap and let rise for 1-1 ½ hours or until doubled in size.

4. In a small saucepan, combine all ingredients. Heat until butter has melted, bringing just to a low simmer. Stir just a minute or two until most of the sugar granules have dissolved.  Remove from heat, stir in fleur de sel. Pour into a 10-in round cake pan or 8×8 square baking pan. Set aside.

5. In a small bowl, combine brown sugar, cinnamon and orange zest if using. Melt butter in a separate bowl.

6. Turn dough onto a very lightly floured work surface. Roll to a 16×12 inch rectangle. Brush melted butter over surface then sprinkle on brown sugar mixture. Use your hands or a rolling pin to press brown sugar into dough. Roll up tightly and cut into 9 equal pieces. Arrange rolls, spacing evenly apart in baking pan. Cover with plastic wrap and let rise until puffy and rolls begin to touch one another, about 45 min to 1 hour.

7. Preheat oven to 350. Bake rolls until golden brown, about 20 minutes. Immediately turn out onto a sheet of parchment or platter, scraping any remaining caramel from the pan onto the rolls.